The hottest poker festival of this summer is taking place in Tallinn - Summer Showdown 24.-29.07

The hottest poker festival of this summer is taking place in Tallinn - Summer Showdown is held at Olympic Park Casinos and Hilton Tallinn Park hotel from 24.07 until 29.07. You can qualify at OlyBet poker room starting from daily freerolls!

During the action packed poker week there is taking place more than 20 tournaments, higlights of the festival are 1100€ NLHE Main Event and 2150€ NLHE Highroller. The Main Event starts on Thursday, 26th of July at 12.00, the starting stack is 30 000 points and during first day will be played seven 60 minute levels, late registration and unlimited re-entries are available until the beginning of level 9. Final table is played on Sunday 29th of July and there will be a Live stream available.

In addition to No Limit Hold'em and Omaha tournaments there are scheduled many in less known formats like Open Face Chinese Pineapple, Archie, 8-Game, 5 Card Pot Limit Omaha etc. Separately is held a Ladies Event where we are expecting more than 100 female players all over Europe! Full schedule is available at Tallinn Showdown webpage or take a look to  Olympic Poker Club tournament schedule.

According to the tournament director, Teresa Nousiainen Tallinn is very popular destination for poker enthusiasts from Scandinavia and specially from Finland - "As well as last summer we are expecting hundreds of players from Scandinavia, not only for the tournaments, but also for action packed cash game tables". 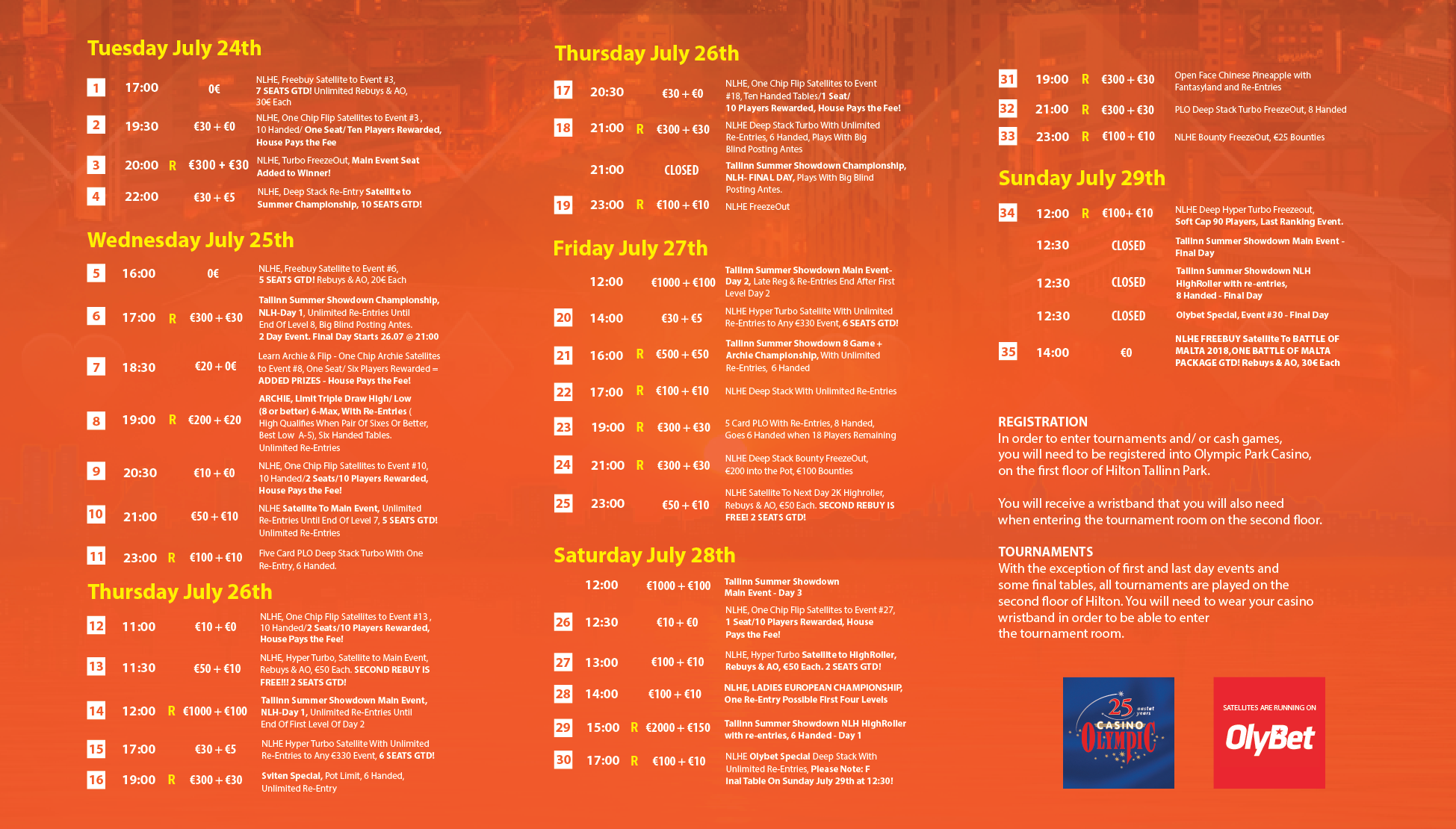 During the festival there is also a Team Competition - in order to participate you have to form a team of 4 players, and register at the event homepage latest by 27th of July at 13:00.  Teams collect points when any of the team members cash at the tournaments except all satellite tournaments and event #28.

Best team will be announced in the afternoon of 29th of July - all members of the best team will receive a package to Battle of Malta 2018 (5 Nights Double/Twin Occupancy @ the 5* Intercontinental Hotel, with Breakfast and Wi-Fi + Main Event Buy-In for 1 Person). All members of the second best team will receive a return package to Tallinn (2 Nights Double/Twin Occupancy @ Hilton Tallinn Park + up to 110€ tournament ticket). Team competition rules can be found here.

PS! Tickets won from satellites may be changed to different value tickets by writing an e-mail to support@olybet.com. For example, if you have won three 110€ tickets you can change them to one 330€ side event ticket etc. NB! Tickets can not be exchanged to money or may not be passed on to other players (unless you have already the same ticket and it can not be used during the festival).

NB! Registration to tournaments at OlyBet is open 4 hours prior to the relevant tournament starting time or until the cap is met..

See you in Tallinn!